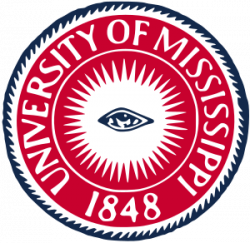 The mission of the electrical engineering department is to provide quality education to the students of the department.

These goals are consistent with the University of Mississippi Vision, Mission, and Core Values Statement and the flagship 2020 goals of UM/2020 Strategic Plan which focuses resources in the areas of instruction, research, and service.

About the University of MS & Oxford, MS

Founded in 1848, the University of Mississippi (UM), affectionately known to alumni, students and friends as Ole Miss, is Mississippi's flagship university. Included in the elite group of R-1: Doctoral Universities - Highest Research Activity by the Carnegie Classification, it has a long history of producing leaders in public service, academics and business. The University of Mississippi, consistently named by The Chronicle of Higher Education as a “Great College to Work For,” is located in Oxford, MS, which is ranked one of the “Top 10 Best College Towns.” With more than 24,000 students, UM is the state's largest university and is ranked among the nation's fastest-growing institutions. The University of Mississippi, which has aggressively implemented many health and wellness initiatives for its more than 2,900 employees, has consistently been named one of Mississippi’s Healthiest Workplaces.

Touted as the “Cultural Mecca of the South”, creativity abounds in Oxford as musicians, artists and writers alike find inspiration in Oxford’s rich history, small town charm and creative community. Oxford is a one-hour drive south of Memphis, TN and is known as the home of Nobel Prize winning author William Faulkner. Over the years Oxford has also been known for offering exceptional culinary experiences and as the home of the University of Mississippi and the Ole Miss Rebels, there is always something here to immerse yourself in. Oxford has also been featured as a literary and arts destination in such publications as The New York Times, Southern Living, Condé Nast Traveler, and GQ. Among other cultural activities, annual events include the Oxford Film Festival, a thriving local music scene, and the Ford Center Performing Arts Series. Oxford is a vibrant university town, filled with unique shops and galleries, eclectic restaurants and clubs, historic landmarks, and comfortable inns.

Email me jobs from University of Mississippi, Electrical Engineering Department